ICDL-EpiRob is a unique conference that gathers scientists and researchers from computer science, robotics, psychology and developmental studies to share knowledge and research on how humans develop sensing, reasoning and actions. This year the Robotics and Intelligent Systems (ROBIN) research group at University of Oslo (UiO) organised and hosted the conference. 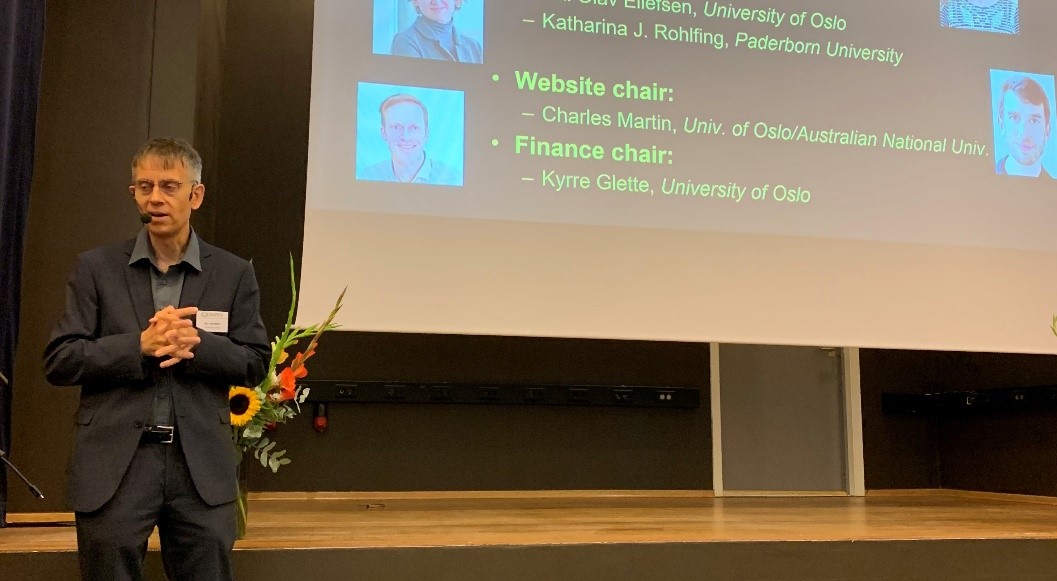 Jim Tørresen at the opening of the conference. Photo: Anam Javaid

The ninth edition of the International Conference on Development and Learning and on Epigenetic Robotics (ICDL-EpiRob) conference took place in Oslo from 19-21 August. The conference was opened by UiO’s Principal, Svein Stølen.

The conference aimed at exploring, extending and consolidating the interdisciplinary boundaries of this exciting research field. This includes taking advantage of interaction with social and physical environments and how cognitive and developmental capabilities can be transferred to computing systems and robotics.

- We are very proud to have conducted a successful conference that gathered more than 170 scientists and researchers from a broad spectre of disciplines. The approach of the conference goes hand in hand with the goals of both understanding human development and applying this knowledge to improve future intelligent technology, including for robots that will be in close interaction with humans, says ROBIN’s group leader, Jim Tørresen.

One of the keynote speakers of the conference was Hod Lipson, professor of Engineering at Columbia University in New York, and a co-author of the award winning book “Fabricated: The New World of 3D printing”, and “Driverless: Intelligent cars and the road ahead”.

According to Lipson, despite the prevalence of big data, the process of distilling data into scientific laws has resisted automation. Particularly challenging are situations with small amounts of data that is difficult or expensive to collect. Lipson outlined a series of recent research projects, starting with self-reflecting robotic systems, and ending with machines that can formulate hypotheses, design experiments, and interpret the results, to discover new scientific laws. Lipson showed examples from psychology to cosmology, from classical physics to modern physics, from big science to small science.

Creating a strong foundation through expertise

ROBIN is a research group at the Faculty of Mathematics and Natural Sciences at UiO. Their goal is to contribute to the development of intelligent systems, both related to systems that in specific tasks or environments can assist or replace human judgment, or systems that can accomplish tasks that can be automated.

ROBIN’s research focuses on systems operating in dynamic environments demanding adaptation at run-time. This includes digital electronics where we have a specific interest in reconfigurable logic technology (FPGA). Simply explained, creating microchips where the functionality can be altered after the microchip has been fabricated and even when the chip is in operation.

- ROBIN believes in interdisciplinary research. As an example, we have contributed to the establishment of the Research Council of Norway funded RITMO Centre for Interdisciplinary Studies in Rhythm, Time and Motion which is a Centre of Excellence. The centre represents a unique collaboration between psychology, musicology, computer science and robotics. We think connecting scientists from different fields is important in order to get new insights and uncover novel and unexpected research results. The focus area of ROBIN is to develop more intelligent systems and robots being applied in health, care and music. That is, by applying machine learning and artificial intelligence techniques, we perform research on how to make both the design and control adaptive, says Tørresen.

Working at both the fundamental and application level

ROBIN works both at a fundamental level of research and at an application level. At both levels, machine learning and evolutionary algorithms are important techniques. At the fundamental level, scientists and researchers at ROBIN often work with robots that are aided by biologically inspired principles, such as learning to walk by themselves. For the application level, the group do research on technology like smartphone solutions to support within mental health treatment and mobile robots for supporting older people living by themselves in their own homes. In such applications, classification and recognition is essential and undertaken by using the latest techniques in deep learning.

Testing theories in practice is also important for the research group. To manufacture their own robots, ROBIN has advanced prototyping facilities which include 3D-printers and milling machines. They have a number of national and international collaborators including research on e.g. robot modelling (Colombia University) and robotic surgery (Intervention Centre/Oslo University Hospital). See a complete list of ROBIN-projects here.