Breakthrough research and development on autonomous systems and AI at NORCE

For the first time ever, autonomous drilling is demonstrated on a full-scale offshore type drilling rig. The autonomous system decides and executes by itself every action that shall be taken and this without human intervention. 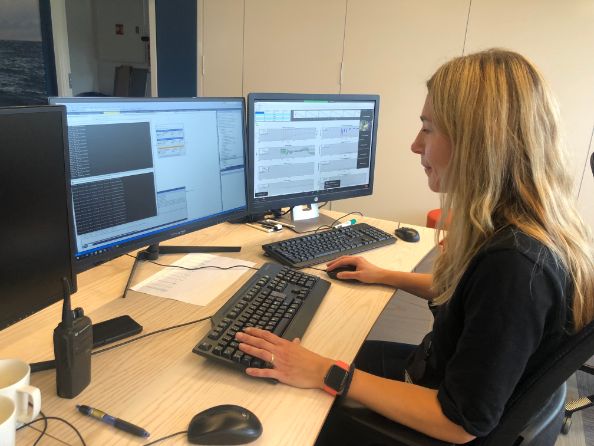 The goal of autonomous drilling is to drill as fast as possible in a safe and efficient way, while taking actions that help preventing and avoiding problems.

- To the best of our knowledge, this is the first time ever that autonomous drilling is demonstrated on a full-scale rig. This is breakthrough research and development on autonomous systems and AI at NORCE, Rodica G. Mihai says, senior researcher at NORCE and technical leader for autonomous drilling in the project.

An autonomous system is the highest level of automation, namely a system that is able to adapt to changing environments and changing goals, to learn both from experience and on-the-fly, and to make appropriate choices given perceptual limitations and finite computation.

The demonstration was performed on NORCE’s full-scale rig, Ullrigg and monitored in the Open Lab operations room.

The autonomous drilling system has embedded protection functions that ensure its safe use, and recovery functionalities detecting abnormal situations and to apply mitigation procedures.

- Within the project, we have extended these safety triggers with automatic functions that attempt to cure the original cause of the problem in order to put back the operation in a normal drilling state. At the same time, we address potential situations that might require to release control from autonomous to manual mode and thus we implemented into the system a management of safe mode transitions, Mihai says.

The autonomous system estimates suitable states which enable the drilling operation to be safe for a few ten seconds and performs transitions to these states if necessary, in order to leave sufficient time for the human operator to take control and handle the current situation.

The decisions that need to be taken in the context of autonomous drilling are not only about optimizing the speed of drilling but also to perform actions that might not look optimal in the short-term perspective and yet, they would decrease the risk of occurrence of drilling events in the long term.

- There is a high potential in this technology to contribute to drillsafer, time and money saved, and emit less CO2, Mihai says.

The methods can be used in the transition to renewable energy as well, such as drilling for geothermal energy, minerals, storage of CO2 and hydrogen underground, monitoring in aquaculture, as well as energy systems.

- We are very grateful for the great support we received from our partners in the project. The successful demonstration of autonomous drilling is a direct result of the good collaboration and teamwork in the project, Mihai says.

The research and development of an autonomous drilling system is conducted as part of a NORCE-led project, financed by The Research Council of Norway and AkerBP, Equinor, Petrobras, Repsol, TotalEnergies and Vår Energi, through Demo2000 program. This is a joint work between NORCE, Sekal, NOV and Odfjell Drilling. The project is entitled “Demonstration of Autonomous Drilling Process Control” (DADPC) and the demonstration was performed on NORCE’s full-scale offshore type drilling rig, Ullrigg.

This article was originally published on norcersearch.no.