Artificial intelligence can reduce the malpractice of bowel cancer

Without high extra costs, artificial intelligence can respond in a minute. In this way, the patient can avoid unpleasant treatment that will not work. 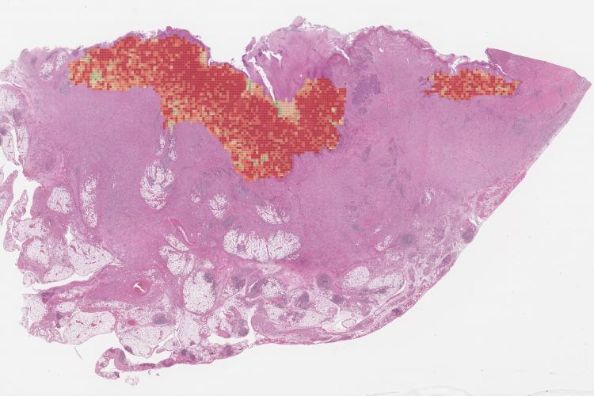 From thousands of images, artificial intelligence draws conclusions about the prognosis of each individual tumor. Photo: Skrede et al./The Lancet

In 2018, more than 4,500 people in Norway had treatment for colon cancer. This is the most common cancer in Norway with a rapid increase over the past 50 years, according to the Norwegian Cancer Society (NCS).

A new method, based on artificial intelligence, can now make sure many of these patients don't get overtreated or wrongly treated.

Doctors distinguish between four stages when treating patients with colon cancer. In the first stadium the patient will be treated entirely just by removing the tumour. In the fourth stadium the cancer have spread to other parts of the body and demand aggressive treatment.

Most patients can be placed in stadium two and three.

“In stadium three, the tumour has spread to the lymph nodes, but nowhere else. Half of these can be cured, while we have no efficient treatment for the other half”, Danielsen said to Titan.uio.no.

Today, however, the same treatment is given to everyone.

“The tumour and an area around it are removed. To the vast majority of patients at stadium three, chemotherapy or radiation treatment are also given”, Danielsen said.

There are a lot of side effects to this. Some patients even die from the treatment.

Danielsen and his research colleagues have therefore tried to find a method that can tell who will not benefit from what is now standard treatment after the tumour is removed.

Half of the patients will relapse

“After five years, half have relapsed. This half has obviously not got the right treatment”, Danielsen said.

The only effect they get is the side effects.

“Then we are left with two possibilities. One is not to bother them any more. The second is to find an even more aggressive treatment.”

The study, recently published in the journal The Lancet, states that the researchers' new method, which involves the use of artificial intelligence, works properly.

"With this method, we can determine that a large group of patients are not going to have any effect”, Danielsen said.

Thus, it is possible to prevent malpractice and over-treatment of these patients, and also make it easier to obtain new treatments.

“The method based on artificial intelligence paves the way for us to develop a better medical remedy because it gives us more definite groups to develop treatments for and test it on.”

The costs are not that great, either. Much of the work has already been done.

An answer in a minute

From cancerous tumours that have been surgically removed, laboratory personnel cut out five millimetres thick slices cast into paraffin to form hard blocks. These are cut into slices that are only three to four micrometres thick and are called slides.

“This has already been done with all tissue samples that come into the hospital”, Danielsen said.

“We already have the cuts. All we have to do is digitize them and analyze them on a computer. Within a minute we have an answer”, he said.

Through so-called deep learning, artificial intelligence has figured out how to distinguish tumours with a good prognosis from those with poor prognosis.

In the learning process, the machine has looked at millions of pictures from colon cancers tumours.

“The machine itself has figured out the various features that best classify patients. We don't know everything the computer does to come to its conclusion”, Danielsen said.

After self-training, artificial intelligence was given the opportunity to try new patients. And then even more patients, until it is now validated. For each patient, it analyzes approximately 6,000 images. The patients are recruited from many different countries, and the samples are prepared at various hospitals and digitized with different scanners.

This way of doing it, Danielsen believes, removes the risk of some misinterpretations that have previously occurred with artificial intelligence.

“The likelihood of those with poor prognosis relapsing is four times higher than for those with good prognosis. On such a large group, this is a stronger prognostic marker than anything else found for this type of cancer.”

The method is already in use at Oslo University Hospital, and Danielsen expects it to spread quickly. They are also planning an international study where patients will be provided with this method.

“Then the next step is to see if the method is also predictive”, Danielsen said.

If that is the case, then it can also predict the effect of the various treatments on each patient.

Håvard Danielsen, Professor II at the Department of Informatics, University of Oslo

This article was first published in Titan.uio.no.